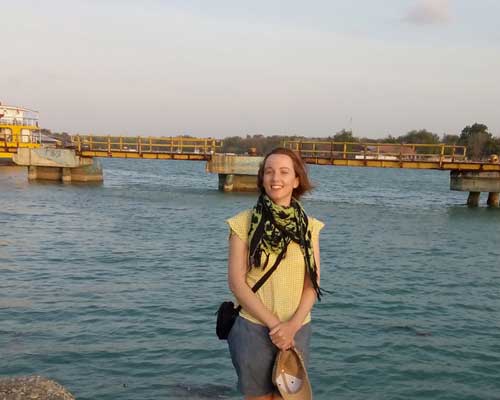 Zoe Kenny has been working at IALF Surabaya for several years. She is originally from Melbourne in Australia. Although Zoe majored in Politics at university she later became interested in climate change and spent several years working as a writer/journalist in this area. Zoe then decided that it was time for a further change and started looking for a career which was of a more interactive nature than sitting at a computer for most of her day. She completed a CELTA course in Sydney and then headed for South-east Asia to teach. Zoe had a fantastic time in Yogyakarta but soon headed back to Australia to complete her Masters in TESOL. Zoe returned to Indonesia 18 months ago and began working at IALF Surabaya. Zoe loves the work and particularly working with academic English students including pre-departure scholarship and IELTS students. As a part of these courses, Zoe relishes the intercultural study sessions and especially the very interactive discussions held in class.

Listen to Zoe
The IALF website uses cookies to optimize and improve your browsing experience. By continuing, you agree to our use of cookies.Continue