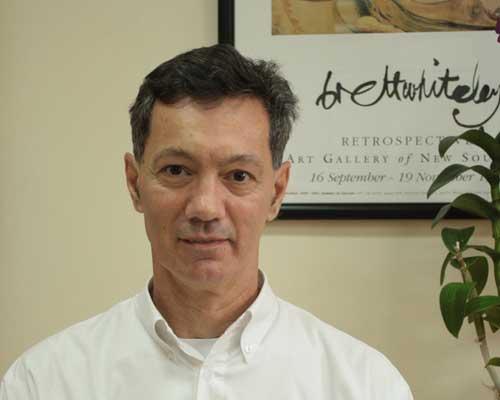 Vlad Pejovic was born in Sydney Australia to Yugoslavian parents. In his younger days, he worked as lawyer, a tour guide, a yoga teacher and a mechanic, and also travelled extensively, before he settled in to English language training. He now has almost 25 years of experience in ELT in Indonesia, as an instructor, program manager, teacher trainer, course designer, materials writer and assessor.

His professional qualifications include a BA LLB, an RSA CELTA, an RSA DELTA, and an MA in Applied Linguistics. He is also active in IELTS (International English Language Testing System) for whom he works as an Examiner Support Coordinator (managing a team of Examiner Trainers in the ASEAN and South Asia region), and as Assistant Principal Examiner (helping to create test and training materials).

Vlad suspects he has some Indonesian genes in his family tree, as he has always felt at home in Indonesia. Initially he lived in Jogjakarta and Jakarta, and in 1991 moved to Bali. He has mostly lived in Sanur – it’s quieter, he says, and the traffic is not so bad. He spends his spare time doing yoga, playing tennis, go-karting with his son, reading and eating… sate lilit is a favorite.

Listen to Vlad
The IALF website uses cookies to optimize and improve your browsing experience. By continuing, you agree to our use of cookies.Continue