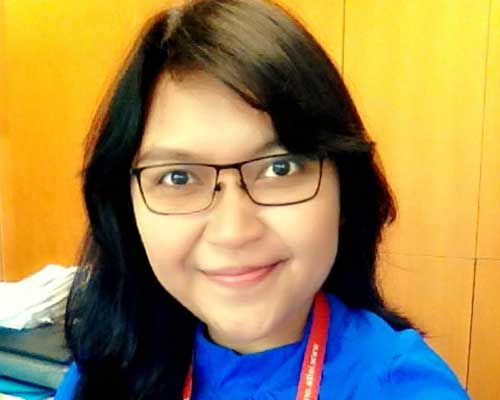 Puspita Sari Ningrum graduated from Satya Wacana Christian University in 2006 with a Bachelor’s Degree in English Language and Literature and followed this with her Master’s Degree in International Relations  (International Security) from the University of Indonesia in 2012.

Puspita joined IALF in 2008 as a Program Officer with the IELTS Testing section of IALF Jakarta. Her current position is that of IELTS Administrator at IALF Jakarta. Her main role is working together with her team dealing with candidates taking the IELTS test. Test days at IALF Jakarta, together with off-site testing, means that Puspita and her team need to look after an average of 500 candidates every month. Puspita loves her work at IALF and Saturdays are particularly busy days for her. Together with her team she processes  an average of 100 people every Saturday - and that is just at IALF in  Jl Rasuna Said, and doesn't include all the off-site test numbers.

One of the areas which Puspita finds very interesting is when she deals with disabled candidates planning to take the IELTS test. These disabled candidates include those who are hearing or visually  impaired. For Puspita, this situation is an opportunity for her to not just do her job but to also make a contribution to the society in which she lives.

Puspita reconizes that working at the IALF has improved both her professional and personal experiences and it is an environment in which her integrity is fully respected.  She also thinks it is a little odd that although she has many years' experience dealing with IELTS, she has never taken the test herself.