Even: How to use it to get a good score in IELTS speaking 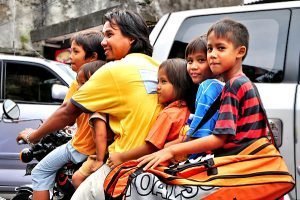 Motorcyclists in Jakarta don’t seem to care about their own safety or other people’s. They weave in and out of traffic without leaving room to manoeuvre. They cut in front of cars and then brake hard. They ride on the pavement and on the wrong side of the road. Even they don’t wear helmets.

As in the example above, bahkan is often translated as even. However, whereas in Indonesian bahkan is positioned at the beginning of the sentence, in English even (meaning bahkan) is positioned in front of the verb:

If you put even (meaning bahkan) at the beginning of the sentence, the IELTS examiner will understand you but you will get a low score for grammar. Many people might also be confused, because even is used in English at the beginning of a sentence together with though:

In this example, even is a part of even though, and no longer carries the meaning of bahkan.

The IALF website uses cookies to optimize and improve your browsing experience. By continuing, you agree to our use of cookies.Continue