The opening ceremony was attended by Anthea Griffin, Consul-General and Eleanor Daly (Consul Diplomacy) from the Australian Consulate in Bali. After the opening ceremony, all awardees continued with an initial briefing with Ibu Devina Mariskova, Awards Cycle Senior Manager, from Australia Awards Indonesia.

For the next 9-weeks, these 40 awardees will complete a full-time Pre-Departure Training (PDT) program. They will study various elements of English for Academic Purposes in preparation to continue their studies in Australia.

The PDT focuses on developing appropriate language, academic and study skills. This course gives all awardees a good understanding of the principles and key themes of postgraduate study in Australia. It also aims to enhance study skills and the independent learning strategies appropriate for studying in a western academic environment. It also ensures they have cross-cultural communication skills for living and learning in a different culture in Australia.

In addition, the pre-departure training program supports the awardees to develop the skills they need to achieve their targeted IELTS scores, in order to continue their postgraduate studies at their chosen university in Australia.

Australia Awards is a long-standing aid project funded by the Australian government. The project aims to give selected Indonesians (both from the public and private sectors) the opportunity to study at postgraduate level in Australia. They are then expected to return to Indonesia and make a suitable contribution to national development here.

The Australia Awards Scholarship has been running for more than 30 years. During that time many thousands of Indonesians have had the opportunity to study in Australia, thereby improving mutual understanding between the two countries. 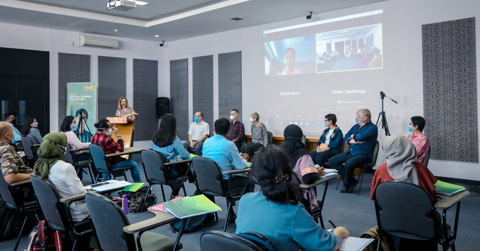 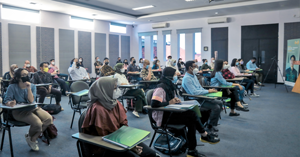 IALF has and continues to work with Australia Awards and DFAT (Department of Foreign Affairs and Trade) Australia to provide a wide range of English language training programs in Indonesia and beyond. IALF’s work throughout the years in Indonesia includes; Kang Guru Indonesia (1989-2016), ELTIS (English Language Training for Islamic Schools) from 2007 to 2010 and ELTA (English Language Training & Assistance) from 2011 to the present.

Click here to learn more about our development projects

IALF has collaborated with many companies and organizations on the design and delivery of customized language and teacher training programs. IALF has also managed several complex educational projects in Indonesia and the Asia-Pacific region, combining training in language, teaching, resources, management, and administration.